Credit & Debit Card Decline Messages: What They Mean and How Recurly Responds

When businesses process a recurring payment using a credit or debit card, they know that a certain percentage of transactions will fail on the first payment attempt. Fortunately, the reason associated with each declined credit/debit card transaction can provide some insights.

The most common decline messages seen in credit/debit card transactions are “Declined,” “Insufficient Funds,” “Temporary Hold,” and “Invalid Card Number.” However, it’s important to note that the same decline message may not mean the same thing across different payment gateways.

For example, for a single merchant, one gateway might return the majority of declined messages simply as Declined. Another gateway might break out “Declined” into three different failure types: Declined, Insufficient Funds, and Temporary Hold. Thus, a merchant cannot accurately compare the Declined category between the two different gateways since each defines Declined messages differently.

Following are the most common decline messages Recurly sees:

As the chart shows, the top three most-common decline reasons are all “soft” declines, which means that the transaction could not be processed at that time, however it might be successful in the future if it is retried. The next decline reason categories are “hard” declines and fraud. Hard declines usually require the payment card information to be updated before the transaction will be successful, regardless of how many retries are attempted.

Fraud indicates that the transaction might be fraudulent. However, the occurence of false positives (genuine transaction falsely predicted as fraud due to some banks’ fraud rules) make it difficult to predict whether a retry will be successful or not.

The top most-common decline messages are similar for B2B and B2C businesses. But B2C merchants usually receive more “Insufficient Funds” and “Temporary Hold” than B2B merchants. This could be explained by subscribers in the B2C segment having lower card credit limits than B2B subscribers. Also for B2C, there are more payment failures from “Card Not Activated” than B2B.

Recurly provides a number of ways to help recover failed transactions. Recurly’s Revenue Optimization Engine uses the power of machine learning to craft a more intelligent retry schedule that is specifically tailored to each individual declined transaction. You can read more about this feature in our blog here and here.

How many failed invoices does Recurly recover after initial transactions fail? 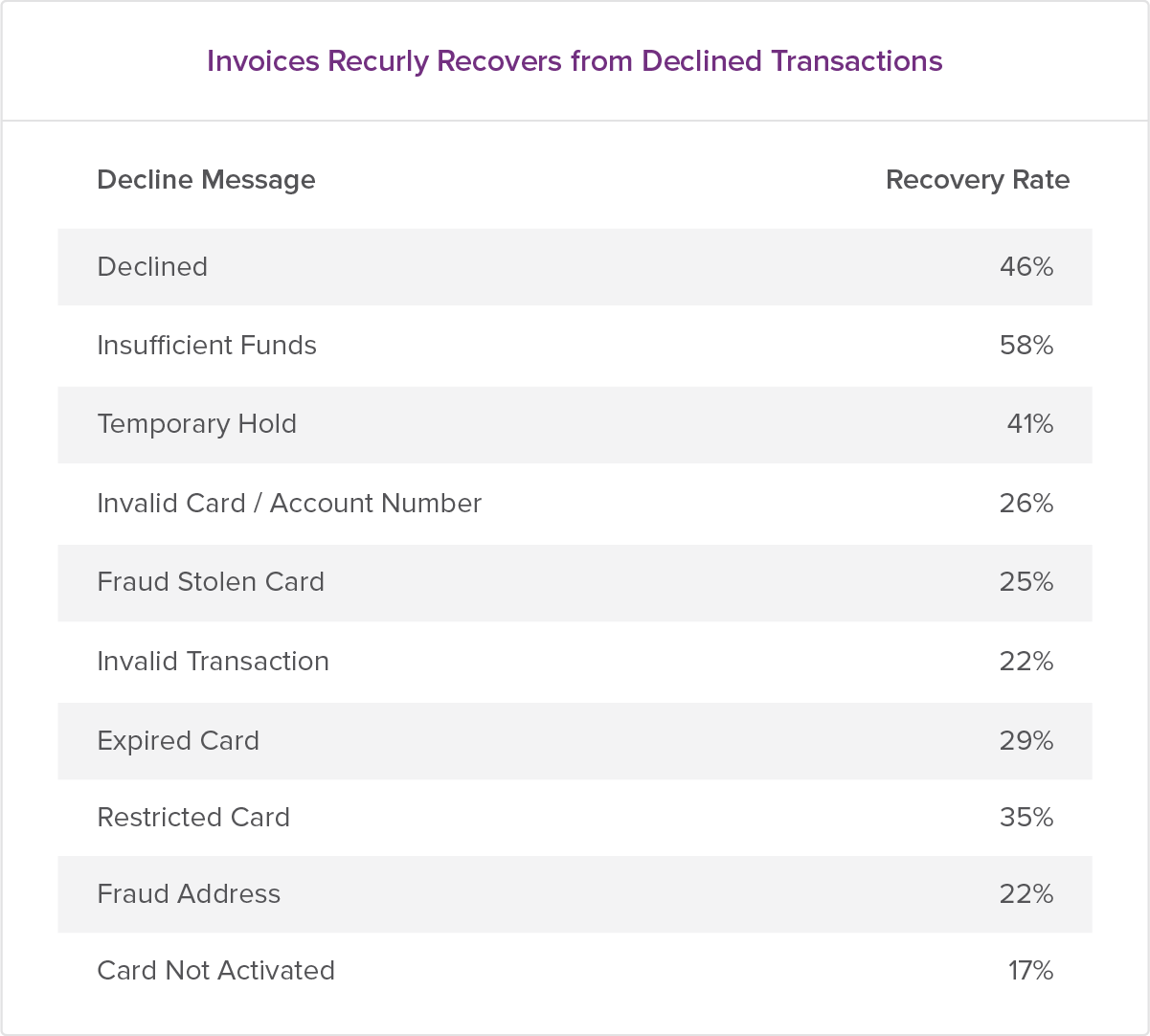 The recovery rate is in general much higher for soft declines than for hard declines, and the recovery rate is the highest for Insufficient Funds. Also in general, the B2B segment has higher recovery rates than B2C across almost all decline reasons. For more on this topic, review the Recurly Research on Top Payment Decline Reasons.

In an upcoming blog post, we’ll cover some of the mitigation strategies that subscription businesses can utilize to avoid failures in recurring payments and how Recurly helps recover transactions if they do fail.